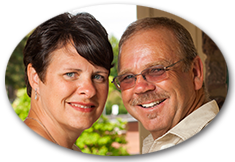 Born in Digby in 1970 to Gary and Judy Carty, Lisa is also the first born of three children. Lisa graduated Digby high school in 1989. Then continuing on to work at local retail venues such as the Elite Shop Clothing and Shoe Store where learning customer service is not only a must but also very rewarding and fulfilling. Becoming a mother to a son gave her the opportunity to be a stay at home for a number of years. In 1997 she was employed by the Mountain Gap Inn where she worked and like so many others fell in love with the property and community.

While working in the reception area for a number of years she was approached to manage the gift shop and guest services until she regretfully had to move on in 2006. With a love of heart for the property and community it was with great delight when the opportunity to become an owner that she whole heartedly agreed saying it feels like home.

Born in Annapolis Royal in 1955, to Raymond and Lucille, Peter is the first of nine children. Peter’s heritage is deeply and proudly rooted in the fishing industry, having fishermen on both sides of his family, with Grandfathers, Father and all Uncles, self employed in the fishing industry. One of the Ladies of the family, Grammy Dot, was the first to introduce him to the food service industry at a very young age learning how to make burgers, serve ice cream, wash dishes and of course count the money at the end of the day. From her canteen she proudly served the locals and whoever else came through the door of her Delap’s Cove establishment where Peter assisted when not in school. From there Dad and Mom decided to expand into the restaurant business in Delap’s Cove with the birth of the Viking Seafood Restaurant and subsequent house keeping cabins in the late 60’s, where a young Mr. Peter gained many hours of experience at washing dishes cooking lobsters. Once the painful process of school was completed there was only one place on earth to be and that was aboard a boat. From the earliest recollection of fishing, at age 12, standing on a wooden box to steer the F/V Mike & Tim Peter steamed his way through a fishing career which still lasts today being involved in all aspects from catching, processing and selling. True to his roots, once again, now co owning, along with wife Lisa, The Villages of Mountain Gap Resort, this lush 33 acre resort which celebrates its 100th year of continuous service to travelers from all over the world.

About MGR
The oldest privately owned Resort in Nova Scotia since 1915, nestled on the shores of the Annaoplis Basin at Smiths Cove, Digby County. Come discover (or rediscover) The Villages of Mountain Gap Resort. Relax by the pool, stroll along the beach, and enjoy nightly bonfires with brilliant sunsets.
© 2015 - 2021 The Village of Mountain Gap Resort
×
CLOSED FOR THE SEASON
Reservations: (902) 245-5841